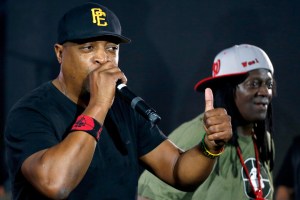 The Wrap reports that Chuck D and Flava Flav, are gearing up for a court battle.

According to court documents, Flav Flav (whose real name is William J. Drayton) is suing Chuck D and Public Enemy management over unpaid royalties. Flav and Chuck have a longstanding agreement to share profits from the group’s music, concerts, and merchandise but Flav says that PE’s management, Eastlink, has failed to pay him what he’s owed.

“This action involves the usurpation of money and property rights from Plaintiff William J. Drayton, known as ‘Flavor Flav,’ the suit reads. “Drayton is recognized as one of the two key members of groundbreaking Hip Hop group Public Enemy. Public Enemy have been inducted into the Rock ‘n’ Roll Hall of Fame and have sold tens of millions of records. Despite Drayton’s position in Public Enemy, the group’s management and related companies have for years attempted to minimize his role in the Public Enemy business, while continuing to rely upon Drayton’s fame and persona to market the brand.”

Flav also says that his voice and image were used without consent on the group’s recent 2017 album, Nothing Is Quick in the Desert, which was released for free in June. Flav said he was supposed to be paid $75,000 for the album but only received $7,500.

Additionally, Flav is suing PE producer Gary “G-Wiz” Rinaldo, whom he also accuses of using his likeness without permission when the producer struck a deal to create PE action figures.