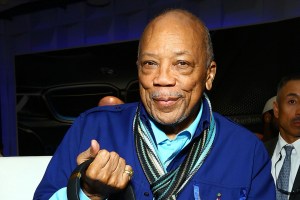 (By: Nick Mojica for TheBoomBox.com)

A legal battle between legendary producer Quincy Jones and the Michael Jackson estate has finally come to an end.

According to a report from the The Hollywood Reporter, Jones was awarded $9.4 million in a trial where he said he was owed $30 million in royalties over songs from Off the Wall, Bad, Thriller and This Is It.

The Jackson estate originally claimed that Jones was owed less than $400,000 and said he hadn’t been paid due to issues with accounting. The producer also claimed he was denied the right to remix music he created with the late singer.

“As an artist, maintaining the vision and integrity of one’s creation is of paramount importance,” Jones shared in a statement. “I, along with the team I assembled with Michael, took great care and purpose in creating these albums, and it has always given me a great sense of pride and comfort that three decades after they were originally recorded, these songs are still being played in every corner of the world.”

While Jones was unable to obtain the full amount he was hoping for, he still saw the trial as a victory.

“Although this judgement is not the full amount that I was seeking, I am very grateful that the jury decided in our favor in this matter,” he said. “I view it not only as a victory for myself personally, but for artists’ rights overall.”